Doors By Decora was commissioned to design, build and install Stained Glass Windows replacing the existing windows in St. Vincent de Paul’s Catholic Church in Tallassee, Alabama. The Priest had a special request that the painted medallion shown below be done of St. Vincent de Paul to match an old picture from his files.

The Priest in his 90’s and still an avid golfer and an active Priest returned several years later for us to build a “Cry Room” window saying members had raised the money and wanted the window made in “his memory” but we decided to not rush things and the wording was changed to in “honor of Father Lynch”.

Learn more about Church Door Collection from Doors by Decora » 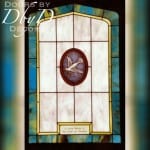