Originally we were only asked to do one door, but during the process the homeowner’s were so impressed that they added four more units.  One of which was two pair of double doors!  We also replaced their back door.

This job was to replace several doors in the home.  This door is coming into the house from their garage.  The outside has a custom carving with an oil derrick and the inside has a carving of a star to represent the Lone Star State.

We finished these doors with a custom stain and provided Baldwin Reserve Westcliff hardware for all the doors.

Learn more about Estate Door Collection from Doors by Decora » 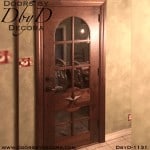